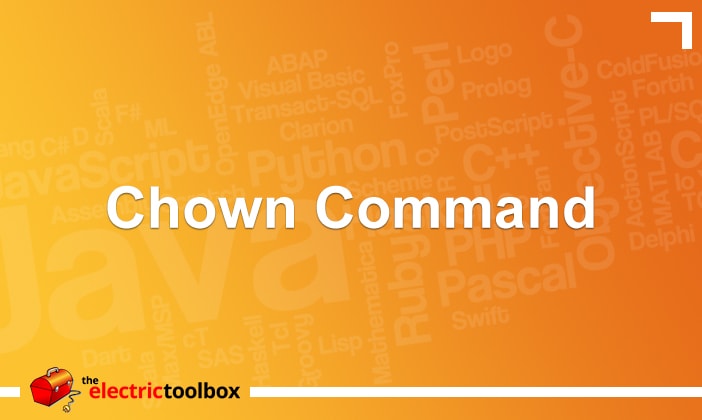 The chown command is useful for making changes to the user or group ownership of a certain file, directory, or symbolic link.

Every file is associated with a file owner or a group. This grants the file or group owner permission access rights to edit, modify, and make changes to the file.

If you aren’t the file owner and want to change the ownership or change the group assigned with the permission rights, the chown command is exactly the command to do this for you.

Learning how to change the ownership of a file with the chown command is a straightforward process. Before we dive in, here’s a few requisites to note:

Learning how to use the chown command starts by understanding the basic syntax behind it:

[:] – A colon is used when you want to change the group of a file

FILE(s) – Refers to the name of the directory, file, or symbolic link

Some notes to remember:

If you want to check the version of your chown in Linux, simply type:

Before you can change the owner or the group ownership with the chown command, you have to find out who the original owner or group name.

This will allow you to specify the login group or owner name and change the user and group ownership of the files and directories.

To check for the user or group ownership of the files and directories, we’ll use the ls -l command:

You’ll be presented with the following output:

Dave – Refers to the owner

users – Refers to the group

We can also use the ls -l command for directories:

Changing the Owner of a File With Chown

If you want to change the owner of a file, the command will be as follows:

FILE – the name of the file

For example, we want to change ownership for sample.txt to user Mark17. To do this, simply type:

Similarly, you can also use the user ID instead of the username. Let’s say Mark17’s user ID is 1001. The command will now be as follows:

To change a file and a directory with the chown command, simply type:

Changing the Owner and Group of a File

Changing the owner and group of a file will require the (:) along with the chown command.

Note that there shouldn’t be any space between the new owner and group specified:

For example, changing the owner and group ownership for the file sample.txt, type the command:

If you don’t specify the group after the (:), the group file will be changed to the user’s login group:

Changing the Group of a file

To change the group of a file, we use the (:) and the GROUP name specified after that:

For example, you want to change ownership to the group name users1. To do this, type the command:

When you run chown with the recursive option, you’ll most likely experience an error message:

To change group ownership of the symlink, you’ll have to use the -h option:

If you want to recursively operate all directories and file under a certain directory, this is where the -r option becomes useful:

The command, as shown above, will change ownership of all subdirectories and files under/var/xxx directory to a new user and group with the name “xxx-users.”

Now, what happens if the directory contains symbolic links? Using the chown command with the recursive and -h option should allow you to chown recursively the symbolic links:

How to Display Chown Process Details

When you execute the chown command, the terminal will not reveal the details of the chown process. If you want to view the details, you can choose from two options: -v and -c.

For example, if we want to specify the current owner as the new owner of a specific file “sample.txt”

Through this command, you’ll be presented with the output:

Using both the -v and -c options are especially beneficial when combined with the recursive option:

By using both the -v and -R option, this will allow you to see all variables affected once you execute the command.

Using the chown command is useful, especially for team-based settings and for managing a wide group of members.

This gives you the advantage of specifying certain users and a specific group to have permission access and ownership for files and directories conveniently.

Convenience aside, you should also take precautions when changing ownership of a file to a new owner or group.

Granting access to files or directories that contain sensitive information you might have overlooked poses potential risks to your Linux system.

Make sure to use the ls -l command to check who the owner of a file is first.

We hope this article has helped you understand more about the chown command and how to use it!

If you’re still confused about how to use chown, you can check out the chown man page or type “man chown” in your command line/terminal.